Complete with the 38 constellation woodcuts

First edition of Avienus's translation of this influential astronomical poem, rarely found complete, pre-dating the editio princeps of the Greek text by 11 years. Based on Eudoxus of Cnidus, Aratus's didactic poem about celestical phenomena (written soon after 276 BC, probably at the Macedonian court) enjoyed immense success and was frequently translated in Roman times - an interest occasioned by the increasing degree to which men viewed their fates tied to astrology and the stars. Avienus's 4th-century Latin text, informed by the Neoplatonic tradition, is expanded considerably from the original. The volume includes additional translations of Aratus by Cicero and by Germanicus Caesar, who offer earlier viewpoints. The latter version is accompanied by 38 zodiacal woodcuts, almost all of which were designed and executed for this volume and thus are present in brilliant early proofs. Four beautiful cuts in the Venetian manner are especially remarkable (cf. Essling, 431).

The "Ora maritima", on the other hand, is a short poetic account of early sea routes used by Greek and Carthaginian traders along the coasts of the Mediterranean, Caspian, and Black Seas. A few scholars have speculated that one of Avienus's sources for his work was the now-lost Massiliote Periplus, a conjectural sailing guide from the 6th century BC, although this idea is controversial. The final text in the volume constitutes the first dated edition of the most popular Roman medical work (by Serenus Samonicus), likewise couched as a didactic poem. The collective volume is thus of the greatest interest for the history of science. The editor, Vettore Pisani, was a pupil of Giorgio Valla.

Folio a4 remargined at foot and p6 (the final leaf present) repaired at head (both barely touching text). A few contemporary manicules. A very clean copy (entirely complete save for 3 blank leaves) of an edition usually encountered only in parts or even fragments, even in institutional collections.

Provenance: from the library of the surgeon, meteorologist, and antiquarian Charles Leeson Prince (1821-99) of Crowborough, Sussex, with his large bookplate (dated 1882) to front pastedown. Later in the collection of the meteorologist George James Symons (1838-1900); bequeathed to the Royal Meteorological Society with the Symons bequest bookplate (dated 1900) on lower pastedown. 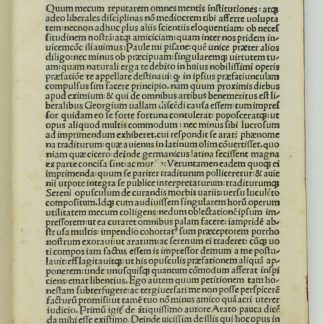