4to. (32) pp. With woodcut illustration to title-page. 18th century half calf over cardboard. Marbled endpapers.

The first of the two undated editions of the "Mirror of the Art of Dying Well" by the Italian theologian, canonist, statesman, and cardinal Domenico Capranica (1400-58), published by Quentell in the 1490s. Pellechet cites one edition dated around 1496, and another dated around 1498. Although slightly differing in text, both editions bear an "Accipies" woodcut, showing a teacher inspired by the Holy Ghost (in the form of a dove on his shoulder) lecturing two disciples, which was used by Quentell between 1490 and 1500. A 17th or 18th century Latin note in ink below the woodcut mentions its recurring appearance in Quentell publications: "N. Haec figura sequenti etiam operi, ab Henrico Quentell Coloniae impresso, praefixa est".

A popular genre of devotional literature of the Middle Ages, "ars moriendi" works were widely distributed both in manuscript and printed form. Capranica created his "Speculum" in 1452; it saw a German translation in 1473.

Binding somewhat rubbed. Paper evenly browned throughout. A few contemporary marginal notes and underlinings. Bookplates of the numismatist and bibliophile Jean-Baptiste Colbert de Beaulieu (1905-95) and of Jean Stefgen to front and back flyleaf. Another ownership, dated 20 July 1874, in pencil to front flyleaf. Several bibliographical notes in pencil to flyleaves. 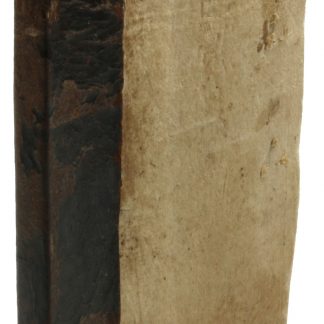