Early, partly unpublished letter to his boyhood friend William B. Smith, nicknamed "Boid", in Provincetown, Massachusetts, written during a three-month skiing holiday in Austria. Hemingway discusses his work for the American literary magazine "The Little Review", laments the lack of snow, and expresses his personal views on light entertainments: "I hate Radio and loath Cross word puzzles. Never played Mah Jong. Regard all them things as amusements designed for Marcelline [his sister] [...] It started to snow about 3 am and was snowing like hell and just what a male needs up until 9.30 when she turns to rain and we're bitched. Need snow bad [...] A male has to climb to 1400 meters to rate the white stuff in skiable amts. here. My legs are doubling in size. Have left the beard grow and de face is now way out of sight. Today in de mail gets a request for a Banal Story for coming Banal number of Little Review. Have done it [under the title of 'Banal Story'] and its ready to mail. Dey wrote they had been told they would be jailed for pooblishing a story of the screeders in current number. Have played it down in display and hope to get by. Number now on the Press. Watch for story entitled 'Mr. and Mrs. Elliot' [in the fall-winter 1924/25 issue of "The Little Review"]. Should rate a laugh even from a Graham cracker addict. Borrow Little Review from Tenn. [the artist Tennessee Anderson, Sherwood's ex-wife] or read it in Radical book shop [in Chicago] [...] Also check for 1,000 francs in mail off new Magazine called This Quarter which wrote for story ['The Undefeated']. Also letter from guy in Berlin wanting to translate the enditer's woiks into Deutch. Such a mail makes a male feel besser [...]".

Concludes with comments on the professional writing market which Bill's sister Katherine ("Stut", "Butstein") was trying to enter: "Glad she pestled them. They aint no seeds in writing that way Boid I'm afraid. On acct. she's gotta compete wit the Peter B. Kyne, Doc Frank Crane and all them guys that are geniuses at turning out the crap and it's their artistic fulfilment. Stut, after the first kick of selling aint going to get any joy out of writing crap. She aint got a genius for it like say Balmer. She's too good. If she wrote good stuff in the end she'd click. Would take a hell of a lot of time maybe. But crap gets male nor female nowhere unless crap's there field. Butstein's aint. She's too damn good and she's passing up the temporal when she ought to be learning to write [...]".

"Wemedge" was Hemingway's nickname among his friends in World War I. Bill Smith would later become the brother-in-law of John Dos Passos (1896-1970). 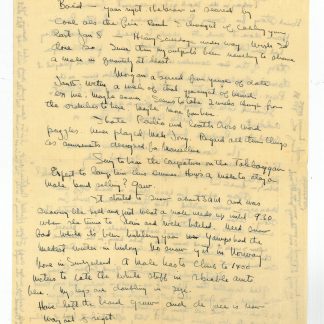