Chesney, [Francis Rawdon]. The Expedition for the Survey of the Rivers Euphrates and Tigris, Carried on by Order of the British Government, in the Years 1835, 1836 and 1837.

Chesney (1789-1872), the explorer of the Euphrates and founder of the overland route to India, intended the work to be complete in four volumes, but half the manuscript was lost and only these two volumes were published. The book describes the exploration trip through the Euphrates and Tiber valleys, to the Arabian Gulf, in search of a shorter route to India. "He explored the Euphrates twice, at first alone, on a raft, in secret and at great risk (he frequently came under fire from hostile Arabs) and later by steamer, although the second attempt was no less fraught with difficulty than the first (the 'Tigris' was wrecked and there were numerous physical obstacles to overcome). Chesney was clearly an explorer of the first order and his courage and perseverance were matched only by his attention to detail and thoroughness in the surveys he produced" (Atabey).

Lacking four leaves in the first volume and (as often) the 14 slip-cased maps. Provenance: removed from the library of Hawkesyard Priory, Staffordshire (dispersed in 2008) with their stamps. Latterly in the collection of Roberto Gulbenkian (1923-2009). 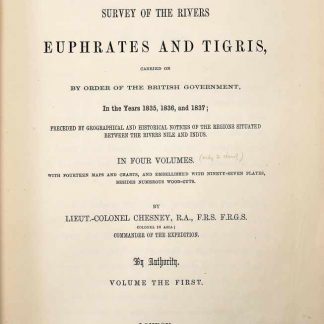 You're viewing: Chesney, [Francis Rawdon]. The Expedition for the Survey of the Rivers Euphrates and Tigris, Carried …London, 1850. € 2,500.00
Add to cart