One of the author's most sought-after works

First edition of this important collection of treatises and essays, one of the author's most sought-after works. The first volume appeared separately in 1824; the three-volume set to which the collection was subsequently expanded usually contains the first volume in the 1826 re-issue only. Several of the treatises make use of Middle Eastern sources or discuss the languages of the region.

Very early in life, Klaproth (1783-1835) devoted his energies to the study of Asiatic languages, publishing his "Asiatisches Magazin" in 1802. He was appointed to the academy in St. Petersburg, and in 1805 he was a member of Count Golovkin's embassy to China. On his return he was despatched by the academy to the Caucasus on an ethnographical and linguistic exploration (1807-08) and was afterwards employed for several years in connection with the academy's Oriental publications. In 1815 he settled in Paris, where in 1816 Humboldt helped procure him the title and salary of professor of Asiatic languages and literature from the king of Prussia, with permission to remain in Paris as long as was requisite for the publication of his works.

Apparently lacking a map in volume 2. The folding map of the Potocki Archipelago is found in both the first and the second volumes. A good, clean set in contemporary bindings, the spines bearing the crowned monogram MED. Provenance: from the collection of Roberto Gulbenkian (1923-2009). A rare work; only three other copies in auction records of the last three decades. 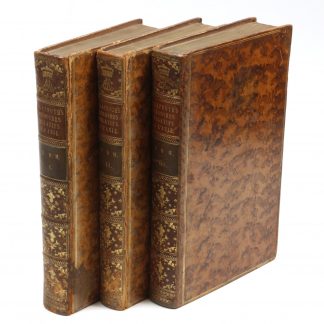