"I was kidding about suicide"

4to. 1¼ typescript pp., ¾ autograph page (in pencil). With typescript envelope.

Important, unpublished letter to the leftist activist and writer Abner Green in New York, remarking on American literary circles and the use of advocating against fascism: "[...] But one thing you don't need to worry about is the way the boys think I'm lousy. If you are ever very popular you will be very unpopular sooner or later. Only one thing will avoid that and that is devoting your live [!] to being popular or being fashionable [autograph insertion: 'ie., Galsworthy - Lewis right now I think - maybe wrong'] and that means that you won't do anything worth a damn and will stink as soon as your are dead. I've insulted all the bastards who make and keep your ['fame', stricken out and corrected to:] reputation while you are doing it so I do not have to carry that as an added weight and have only my stuff to devote myself too [!]. As long as I can write will always be popular again sooner or later whether want to or not. What the boys say is what is fashionable. Hell I was fashionable as you want but when it was going on I stayed away from the country and never saw anybody that read my stuff. They don't really care anything about writing and they know nothing about it. Right now if I could write Hamlet the Marxian slanted critics would say it was lousy. But if I came out as a communist I could write straight shit slanted and they would say it was marvellous and world moving epochistic [...] It's funny though how literary people hate fishing and shooting. They also hate kidding. If you kid that means you can't really be any good because they wouldn't kid because that would mean a loss of their dignity [...] I was talking with Jack Lawson (John Howard Lawson) and I was kidding about suicide, making some joke about it and he walked out of the room announcing his brother committed suicide and he would hear no jokes about it. Well so had my old man and plenty of others in the family. What was this starting to prove? Oh yes you mustn't make jokes if you are a serious writer. I think you slipped on the Malady of Power piece. That was meant to reach people that the other one wouldn't; the people who if they saw a serious piece by me wouldn't read it. They sold 50,000 copies of that notes on the next war in Hungary in pamphlet form. The piece on Wings Over Africa will raise plenty hell there too and will do plenty of damage smuggled into Italy as a pamphlet. What's better? To do that? Or sit around with Sidney Kingsley, Clifford Odets, Archibald MacLeish and Genevieve Taggard at a restaurant and discuss steps we must take against War and Fascism? Well lets not get into that. The difference is that if you go to the meetings and put your name on the letterheads you are fashionable and if you do your goddamndest against War and Fascism knowing what both of them are and haveing [!] seen plenty of both and how to hit them where they hurt and keep on trying to do it why you are a shit who writes [inserted: 'rubbish'] for the Men's Clothing Trade Journal [... ]".

In the autograph postscript Hemingway promises to send Green a copy of a text published in "Esquire" and his 1935 work of nonfiction "Green Hills of Africa", also mentioning his wish to settle down and write long novels: "Don't bother to spend 50c on the Feb. Esquire. I get one free and will tear the piece out and send it to you. You were smart about the country in Green Hills - I had to learn to do that you see - Learning my trade if I could ever of write a big novel sometime with all the different kinds of people and the country and the whole damned thing it would be worth having learned to do - after I go where I want to go and see what I want to see before I die. But I have worked hard enough to be entitled to live my life for a while because you are dead so damned soon. Am going to settle down somewhere where there is a good trout stream and do nothing but write every morning - and fish every afternoon, write long novels. But not ready to do that yet. Haven't you any curiosity about the different continents or places?".

Not in Baker, Selected Letters. 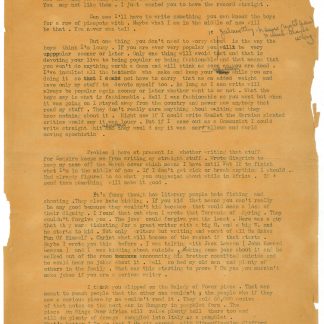