Probably to his superior at the Vatican library, Cardinal Flavio Chigi, or to another member of the Roman Curia, written while Gradíc was on his way from Dubrovnik to Rome, where he would assume his new post as custodian of the library. Travelling to Rome on the old Via Flaminia and Via Francigena, Gradíc stopped at the small fortified town of Torrenieri in southern Tuscany. From here he bemoans that his letter will reach the recipient before he himself will and insists that he will continue to "satisfy his debt" to the library.

In connection with his appointment as custodian of the Vatican Library, Gradíc was releaved of his duties in Dubrovnik, which allowed him to stay in Rome permanently. This new freedom permitted him to strengthen his position within the Roman Curia and to devote himself more fully to his broad literary and scientific interests. As one of the most senior officials of the Republic of Ragusa, Gradíc played a key role in the reconstruction of Dubrovnik following the disastrous earthquake of 1667. He described the event in Latin verse and organized help from all over Europe. In 1682 he succeeded his benefactor and superior Flavio Chigi (1631-93) as Librarian of the Vatican Apostolic Library.

Minor foxing; a collector's note in pencil on the recto. 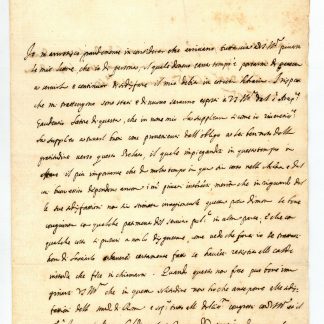