Rare manuscript of an anonymous report of the martyrdom of the Blessed Baltasar de Torres Arrias (1563-1626), who was burned at the stake in Nagasaki on 20 June 1626 together with eight other Jesuits. The report is largely based on a letter that Baltasar de Torres had managed to write during his imprisonment in Omura. It repeats details from the letter such as description of Torres's diet in prison, which consisted of "rice, a broth with herbs, and a cured sardine". The other "authentic writings" from Japan that are alluded to in the title of the manuscript have not been identified. The earliest known publication of Torres's letter with an extensive description of his martyrdom is in Juan Eusebio Nieremberg's "Vidas exemplares" (vol. 4 [1647], pp. 559-572). The manuscript at hand is not based on Nieremberg's version, as it wrongly states the 21st of June 1626 as the day of the executions. This grave error points to an earlier source, as the date would have certainly been corrected based on Nieremberg's widely read martyrology.

Torres had defied the Japanese ban on all Christian missonaries in 1614 and was among the Jesuits who took refuge in Osaka castle until its capture in 1615. He continued his work as a missionary and provincial of northern and central Japan in secrecy for more than another decade. In 1626, Baltasar de Torres was finally arrested near Nagasaki and imprisoned in nearby Omura. His Japanese catechist, the Blessed Michael Tozó (ca. 1588-1626), soon followed Torres to prison. On 12 June 1626 the governor of Nagasaki returned from the court in Kyoto with a death sentence for all Jesuit prisoners. For their execution in Nagasaki, Baltasar de Torres and Michael Tozó were joined by seven Jesuits who had been imprisoned in Shimbara, including the Blessed Francisco Pacheco (1566-1626), the provincial general for Japan alluded to in the title, and the Blessed Gianbattista Zola.

With a large old waterstain throughout and several deep tears partly affecting the text (without loss). 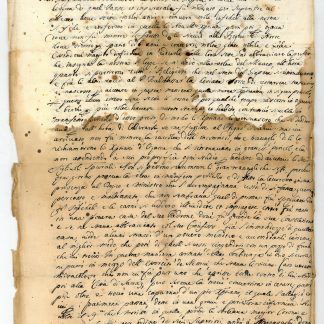