Photographic postcard ("Afrique Occidentale, Jeune féticheuse") sent to Reneé Galabert. The postcard was sent from Dakar by Marie Curie and her daughter Iréne to Renée Galabert at the "Institut du radium" in Paris, asking for news from the laboratory and about the devices provided by a certain Mr. Muguet, while the two were en route to Brazil, where Marie Curie would held lectures in Rio de Janeiro, São Paulo and Minas Gerais in the summer of 1926. During their visit to Brazil the Curies were accompanied by a committee of the "Federação Brasileira pelo Progresso Feminino" (Brazilian Federation for Female Progress): thus, the tour not only served to make the "Institut du radium" more widely known and respected, but also reinforced the status of women in Brazil, encouraging them to participate in the professions.

The Polish-French chemist Marie Skodowska Curie was the first woman to win a Nobel prize and the only woman so far to win it twice. Marie's daughter Irène (Joliot-)Curie was also a scientist and Nobel Laureate for the discovery of artificial radioactivity (1935). Renée Galabert (1894-1956) was an important researcher of the Institut du radium, who had a major role in establishing analytical standards at the Curie-laboratory. She worked at the Institute from 1919 until 1933 as the head of the measurements department. 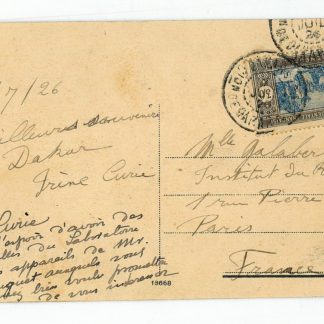