"The squeeze in which this royal and ducal chamber finds itself": The Duchy of Milan in the late 18th century

Collection of royal decrees issued in the name of King Charles II of Spain and signed into law by Antonio de Ayala Velasco y Cardeñas as governor of Milan (1686-91). The earliest object in this collection is an official copy of two royal decrees, granting a pension to the inspector general of the Milan army Don Diego Patiño, who had served "for sixty years", and extending the payments to his heirs in consideration of Patiño's great age and services. The earlier decree from 1685 states that Patiño did not continue to receive his pay despite royal orders: "al cavo de su vejez se halla con la incomodidad, de que no se le pague el sueldo, [...] no obstante las reiteradas ordenes, que he mandado dar para ello [...]". The second decree, extending the pension to Patiño's heirs, was issued in Madrid on 15 October 1686 and copied in Milan on 30 November 1686.

On 22 September 1687 a royal decree that authorizes the Duchy of Milan to sell fiefdoms and privileges in order to rehabilitate the stretched finances of the duchy, also granting extended payments to the Spanish crown, was copied and signed into law. An almost identical decree had been issued by King Philip IV in 1647. The financial situation of the war-torn and disease-ridden Duchy was fragile during the entire Spanish rule (1559-1707). The document is annotated in Spanish and summarized in Latin. A Latin erratum and explication of the decree has been added to the document on 15 January 1688.

On 18 July 1689 the governor signed a royal decree in Italian overriding objections to a previous order to pay financial aid to the colonel Juan Simón Enríquez de Cabrera, whose regiment had fought in Catalonia during the Nine Years' War (1688-97). The objector, possibly the governor himself, had argued that such payments to colonels, sergeants, and other military ranks were uncommon. No further reason than "the higher service of your majesty" was given for the perpetuation of the order.

The youngest document in the collection concerns the administration of the salt production and salt monopoly in the Duchy of Milan. The royal decree copied and signed on 14 July 1690 approved a plan for two production sites and a financial prognosis. The production of salt was very limited in the Duchy of Lombardy, with minor facilities in Bobbio and Salsomaggiore. Most salt was imported from Venice.

Antonio de Ayala Velasco y Cardeñas served successively as viceroy of Navarra, governor of Galicia, and viceroy of Sardinia before assuming the governorship of Milan in 1686. 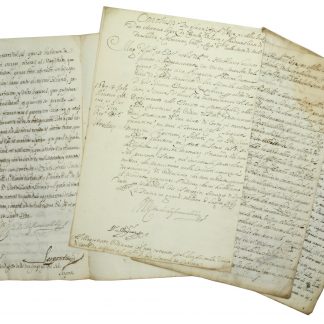