The Mandate Reports on Palestine and Trans-Jordan

[Palestine - Mandate Reports to the League of Nations]. Report by His Majesty's Government in the United Kingdom [...] on the Administration of Palestine and Trans-Jordan.

Large 8vo (245 x 178 mm). 29 volumes bound in 5. Includes 33 folding maps and 5 folding diagrams, a number of which colour-printed. Modern half calf with marbled boards and giltstamped titles to spines.

A near-complete run of mandate reports on Palestine and Trans-Jordan from 1921 onwards, mostly published under Britain's mandate from the League of Nations, comprising both the relevant Colonial series and the Command Papers series as presented to parliament.

As early as 1920, when the joint British, French and Arab military administration over the formerly Ottoman Levantine provinces was transformed into a civil authority, Britain's High Commissioner of Palestine was required to file regular reports to the Colonial Office on the operations of this new administration. From 1922 onwards, when Britain was granted the Mandate for Palestine and Trans-Jordan, these reports were adapted for the Council of the League of Nations. They cover the finances and taxation, customs and trade, law and legislation, education, public health, public transport and immigration in Mandatory Palestine, also detailing the various security problems and sectarian strife in the territory and covering the establishment of the Palestine Gendarmerie, its transformation into the Palestine Police Force, the introduction of military units and sources and causes of violence. The reports were discontinued with the advent of the Second World War.

Extensive sets as ours are extremely rare in the trade; the last set sold at auction did not contain a single volume of the Command Papers series (Christie's 2016, sale 12051, lot 366), as present here. 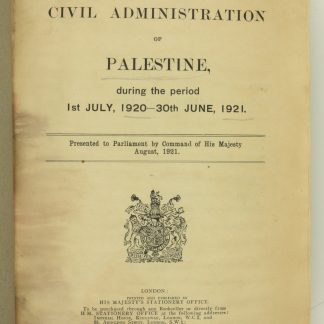