Very rare first Spanish translation of this sensational account, which spurred numerous re-printings, piracies, and abridgements. A perfect ideal of the 'Oriental despot', the recent exploits of Nadir Shah (Tahmasp Quli Khan, 1698-1747) fascinated his European contemporaries as much as the shocking overthrow of the Ming Dynasty by the barbarian Manchus a century earlier. From humble beginnings as a shepherd-boy, Nadir's rapid conquest of much of Western Asia and his prowess as a military leader earned him (later) comparisons to Napoleon.

The present work, translated by Jacinto de Lisasueta, was based on the "Histoire de Thamas Kouli-Kan, Sophi De Perse" published at Amsterdam earlier that year.

Barbier mistakenly supposed the French original to have been authored by J. A. du Cerceau, but “this attribution is clearly incorrect, because the book deals with events up to 1739, while du Cerceau died on the 4th of July, 1730" (Lockhart, Nadir Shah, p. 315). Today, it is supposed that the Histoire was based instead on the accounts of the Jesuit missionary Kruzinski (1675-1756) who was active in the Safavid Empire between 1707 and 1728. 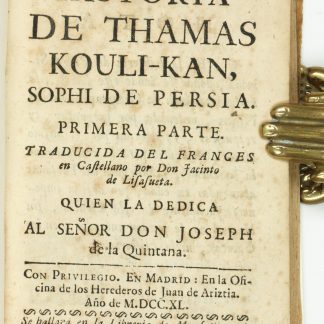