Rare edition of the extensive commentary on Plutarch's essay "De virtute morali" by the humanist and Duke of Atri, A. M. Acquaviva (1458-1529), first published in 1526. The present edition, published nearly 80 years later, is a reprint of the first, and was edited by the humanist Giulio Belli (1570-1650). Apart from the four-book commentary, which makes up the largest part of the volume, it includes Plutarch's text in Greek type and Latin translation. The majority of the woodcut illustrations accompany the commentary on Plutarch's writings on astronomy (pp. 78-96), displaying the orbits of the sun, moon, Earth, and other planets, as well as the section on Pseudo-Plutarch's "De musica" (pp. 26-77), showing bells and musical scales. Attributed to Plutarch, "De musica" was included in several editions of the "Moralia", a text corpus of 78 essays and speeches ascribed to the first-century Greek scholar.

Handwritten ownership of the Venice senator and collector Giacomo Soranzo (1686-1761), dated 1736, to second flyleaf. His library, comprising 4,000 manuscripts and 20,000 printed books, was dispersed in 1780. The first flyleaf bears a handwritten note of acquisition, dated December 1803, as well as another note in a different handwriting referencing reviews of other works by the editor Belli. 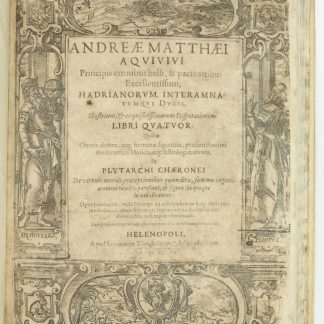