4to. (4), 30 pp. With 13 black and white photographic plates, one photograph illustration in the text, and one folding map of Iraq. Staple-bound. Original printed wrappers.

Rare - and intriguing - lecture on the state of Iraq given by Dr Mohammed Fadhil Jamali, the Prime Minister of Iraq, to the Lebanese Forum on 28 April 1953. Apart from the history of Iraq, it discusses issues of contemporary politics including education, public health, agriculture, economy and finance, and foreign policy. Several pages describe the activities of the Iraq Development Board, a project established by the Iraqi government in the early 1950s to strategically plan, oversee, and utilise funding from foreign creditors and increased export revenue from the Iraqi oil industry to modernise the country and improve the living conditions of Iraqis. Intended as a six-year programme, the Iraqi parliament approved "155 million dinars [...] to be spent, on irrigation, main roads, buildings and health institutions, land reclamation, the filling in of swamps, agricultural and building projects and the setting up of industries" (p. 24). Although for the main part praising the Board, Jamali also concedes some difficulties in meeting the expectations of "the ambitious Iraqi [and] his anxiety to catch up with modern times, not at a camel's pace but with the velocity of a jet-plane" (p. 25), common complaints including the lack of communication between the government and people, the instability and short duration of Iraqi cabinets, as well as cases of bribery and inefficiency.

The illustrations include portraits of Kings Faisal I, Faisal II, and Ghazi I, as well as Crown Prince AbdulIlah, and the author. In addition, they display cultural artifacts like the Codex of Bili-Lama and part of Abassid Palace in Baghdad, schools, hospitals, date palms, and irrigation projects, including work on the Tharthar Scheme near Samarra, as well as a rope pulling exercise among the workers and officials of the Iraq Petroleum Company. 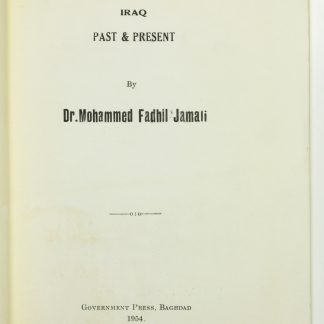