From the library of the British Consul in Zanzibar

Said-Ruete, Rudolph. Said bin Sultan (1791-1856), Ruler of Oman and Zanzibar. His Place in the History of Arabia and East Africa.

Covers a little soiled (lower cover more so); light wear to extremeties; insignificant spotting confined to flyleaves. A fine copy with ticket of The Times Book Club to lower pastedown. Provenance: from the library of Christopher Palmer Rigby (1820-85), who served as the East India Company's agent and British Consul in Zanzibar from 1858 to 1861. 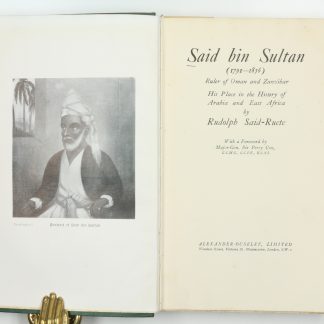