A unique album of 44 original, almost entirely unpublished photographs assembled by Captain H. F. Walters of the 24th Baluchistan Regiment (also known as The Duchess of Connaught's Own Baluchistan Regiment of Bombay Infantry), taken during an expedition led by (Sir) Henry McMahon to the southern border of Afghanistan and northern Baluchistan. Following the drawing of the Durand Line in 1893, created by the British to establish a buffer zone - Afghanistan - with a view to protecting the Indian Empire from a possible Russian invasion, McMahon's 1896 mission served to demarcate the border between these two countries from Gwazha as far as Koh-i-Malik Siah, a mountain which forms the meeting point of the boundaries of Afghanistan, Persia, and Baluchistan. Their work included drawing up detailed topographic maps locating the 94 boundary demarcation pillars they erected (these publications remain available in the Survey of India collection at the British Library).

The present album of photographs bears witness to the conditions of the expedition. Several images show the participants: apart from Captains McMahon and Walters also the surgeon Dr. Frederic Pinsent Maynard and the geographer George Passman Tate, who managed the surveying team. Other photos show the various British and Afghan delegations, the camps at Spintizha, Duganan, Chagai Fort, and Shorawak, an Afghan cemetery, nomad tents near Mehrab, wells, the ruins of Gudar-i-Shah, and views of the desert, but also soldiers of the Baluchistan regiment on parade, in combat training, and playing the bagpipes. One photograph, showing the British officers and their team on the summit of Koh-i-Malik Siah, "where three Empires meet", was published by G. P. Tate in his 1909 book "The Frontiers of Baluchistan"; the others could not be traced in any publication or collection.

With a loosely inserted bifolium providing the "Names & nos. of Photographs" (from which the captions appear to be drawn), written and signed by G. P. Tate.

A well-preserved ensemble of largely unseen photos, documenting the demarcation of a tenuous border that continues to haunt geostrategic considerations in what has latterly been labelled the "Afpak" region. 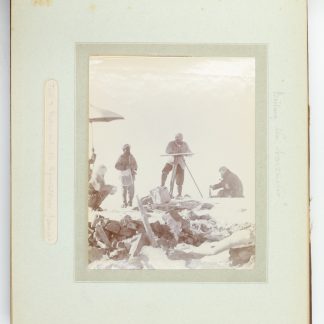