The first translation of any of Shakespeare's plays into Hebrew

First Hebrew edition: the first translation of any of Shakespeare's plays into the Hebrew language. Perez ben Moses Smolenskin (1842-85), the editor, writes in the the introduction: "Shakespeare’s plays in the Holy Tongue! … what a great prize the translator of these plays has brought into the treasure-house of our language." Smolenskin, born in present-day Ukraine, enjoyed a traditional education, studied languages and eventually settled in Vienna, where he founded the journal "Haschachar" ("The Dawn") in 1868, a trailblazing publication for Hebrew literature and language, as well as for the Jewish national idea.

"The first Hebrew Shakespeare translations are a product of the Haskalah, or Jewish Enlightenment. [...] Maskilim, adherents of the Haskalah, sought to promote greater integration of Jews into their European host societies with a view towards eventual emancipation. [...] A central element of the Maskilic project was the creation of a modern literary culture in Hebrew including genres that had not previously existed among Ashkenazic Jewry" (Kahn, p. 1). As early as 1816, Salomo Löwisohn offered 15 lines from "Henry IV, Part 2", and between the 1840s and the 1870 a half-dozen fragments (mainly monologues) from "Hamlet" and other plays were translated into Hebrew, all via German. "This early period of marginal Hebrew Shakespeare translation ended with the publication of I. E. Salkinson's Hebrew translation of Othello, 'Ithiel the Cushite of Venice' (Vienna, 1874). Salkinson's 'Ithiel' marked the beginning of a new era in the story of Shakespeare in Hebrew because it was the first rendition of a complete play to appear in the language and the first to gain widespread critical attention in Maskilic literary circles. In addition, it was the first Hebrew Shakespeare version to be translated directly from the English original" (Kahn, p. 3).

The talented linguist Isaac Edward Salkinson (1822-83), a native of Vilna, settled in Vienna, having converted to Protestantism in London and served as a Presbyterian priest in Glasgow. He also translated "Romeo and Juliet" as well as Milton's "Paradise Lost".

Includes both the Hebrew and English title. Very brittle with a few edge flaws, but complete; English title professionally remargined. Very rare; no copy in Vienna. 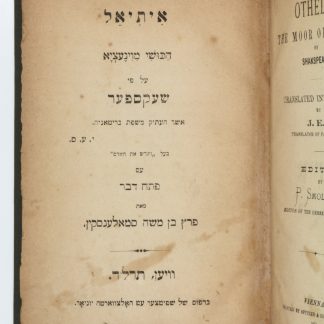