Two ‘New-Year’s Gifts’ for Young Readers, with 26 Emblems; No Copy of Either Title in US Libraries

1) 12mo. (4), 7-46, (2) pp., including engraved frontispiece and 14 half-page emblems in text, as well as engr. frame on B12r. Lacking letterpress half-title (A1). Old paper repair to margin of A4 not affecting engraving or text; a few tiny wormholes on A3-A4, imperceptibly affecting engraving on A4.

In De Minnende Siele, each emblem is presented with a six-line rhyming motto and depicts a young boy performing a secular activity with the assistance of an angelic companion: horse-sledding on a frozen river (January); tending the hearth (February); gathering kindling (March); picking flowers (April); erecting a Maypole (May); shearing sheep (June); harvesting hay (July); sewing seeds (August); harvesting fruit (September); sampling the wine barrel (October); slaughtering the ox (November); and playing snow-golf (December). The ultimate example of a ‘loving soul’ is held up in a further emblem, depicting Francis Xavier, Jesuit apostle to the Indies, on a foreign shore. Facing the illustrations are Scriptural quotations as well as an edifying ‘Exempel’.

In De Lydende Siele, the format remains the same but many of the emblems reflect some aspect of hard work which can be equated with religious suffering: “the New Year begins / From new sins… The iron [chain] / Makes you wiser” (January); woodworking (February); tree-tapping (March); vine-pruning (May); operating a printing press [?] (June); threshing grain (August); stone-carving (October); and so on. However, a few of the subjects seem to relate to their mottos in different ways: bell-ringing (April); playing the bagpipes (September); letting off fire-crackers (November); and so on.

Such small format, almost ephemeral ‘New Year’s gifts’ do not appear to have survived well. OCLC shows no copy of either work in US libraries. Although De Lydende Siele presents itself as “den 2. Druck”, no physical copy of an earlier edition can be traced in the STCV or OCLC. 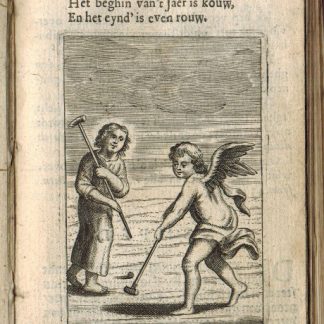