Moore, J. Hamilton. The Young Gentleman and Lady’s Monitor, and English Teacher’s Assistant: being a Collection of Select Pieces from our Best Modern Writers: calculated to Eradicate vulgar Prejudices and Rusticity of Manners… The Seventh Edition.

Scarce edition of this classic early New England school-book, here in an exceptionally interesting copy. Alongside dozens of early ownership inscriptions (most dating from 1820-22) which demonstrate how the book passed from pupil to pupil in the classroom, often also within a family, early adolescent readers have added colour and manuscript captions to the illustrations found at the rear of the book. A figure intended to show a boy extemporizing has thus been transformed into “Gen Washington”, while figures depicting the correct motion of the arm during a speech have similarly been coloured and labelled as “Com. Hull” and “Com. Bainbridge”. Finally, two figures side-by-side have been decorated with a few military medals and labelled as ‘Mr. Harry Hobart” and “Mr. Sam Hobart”; we have been unable to definitively identify these brothers (?) but the Hobarts were a Boston family and perhaps also former owners of this school-book.

The readers’ imagination was evidently captured by Washington as well as Commodore Isaac Hull, whose command of the USS Constitution (‘Old Ironsides’) during the War of 1812 made him a national hero. Commodore William Bainbridge enjoyed an inauspicious start to his career but it is interesting that his actions during the War of 1812 seem to have redeemed him in the eyes of the American public, at least in the opinion of young “Betsy Taber”.

As the title suggests, the book was intended as a manual for children of both sexes, in order to “Eradicate vulgar Prejudices and Rusticity of Manners”. This is borne out by the wide variety of children who have signed their names to the pastedowns and illustrations: “Patience Taber her Monitor”; William Taber Conklin; Angelina Brown; Pardon Taber; Phebe [sic] Taber; Betsy Taber; a lengthy boy’s joke, “Silas Raymond’s Name, I guest you, what makes you smell so ugly, Love, Dewey”; and so on. The text is full of sage advice for young Americans: “A superior capacity for business, and a mere extensive knowledge, are the steps by which a new man often mounts to favour, and outshines the rest of his contemporaries. But when men are actually born to titles, it is almost impossible that they should fail of receiving an additional greatness, if they take care to accomplish themselves for it” (p. 3); etc.

Final section bound in a different order to the ESTC record, showing signatures a6, b6, c2, R4 but collated and complete. A very worn copy: bound in contemporary calf, joints repaired with string (rear joint very cracked); dog-eared throughout; much fingersoiling and ink-staining commensurate with classroom use (particularly the section on hymns); closed tears on pp 51, 177, and 238; small hole in p. 183; some wear and loss to inner lower corner of pp. 313-368; and loss to the lower margin of the bookseller’s advertisements on leaf R4.

ESTC shows 7 locations in the US, being quite rare for a late 18th century American imprint. 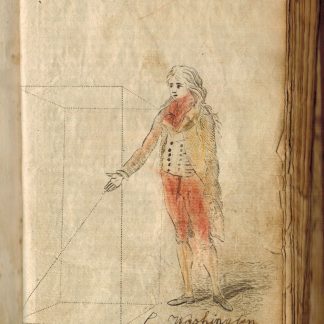