Scarce sole edition of this attempt to panegyrize the hapless Queen of France, Marie de Medici (1575-1642), who following the assassination of her husband Henri IV became Regent of France from 1610 to 1617. Unable to comment on the virtues of the queen herself, Boissat instead resorts to measuring her value by the ‘brilliance’ of her illustrious male ancestors, who are depicted in the densely-engraved frontispiece as cut gemstones mounted in an elaborate cartouche surmounted with the fleur-de-lis.

Boissat’s exercise in patronage seeks the Regent’s approval in two separate prefaces addressed to her, in which he expounds the ‘brilliance’ [hence the gemstone pun] of the House of Medici. Having suffered a fraught marriage with the philandering Henri IV, Marie found herself deeply unpopular when she assumed the throne and was the subject of an armed rebellion against her rule led by Henri de Bourbon in 1614. She was exiled by her own son in 1617 but restored in 1621, and finally attempted an unsuccessful coup against the influence of Cardinal de Richelieu at court. 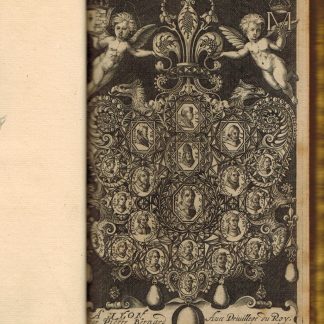