Lamentations for the Five-Year-Old Daughter of Charles IX; One Copy in US / UK Libraries

Very rare first edition of this funerary oration and poetic tribute to Marie-Élisabeth, Princess of France, who died aged 5 of unknown causes on 2 April 1578. Although barred by Salic law from inheriting the throne in her own right, as the only child of Charles IX and Elisabeth of Austria, she embodied a formidable consanguinity among European noble houses. Her maternal grandparents were Maximilian II, Holy Roman Emperor and Maria of Spain, and her paternal grandparents were Henry II of France and Catherine de' Medici. Rounding off this Valois, Habsburg, and Medici parentage, her godmother was none other than the Protestant Elizabeth I of England.

When Marie-Élisabeth was just two years old, her father died; her mother returned to the Habsburg court in Vienna shortly thereafter, leaving her mainly in the care of her aunt, Marguerite de Valois, wife of the new king Henry IV. Sorbin thus dedicates the present work in four pages to Marguerite, before choosing as his Biblical starting point Lamentations II, 13. He naturally praises the princess’ illustrious ancestors and gives examples of historical parallels to her untimely death; following this is a 4 page poem ‘Tombeau de Madame Marie Isabeau de France…” which prays for the soul of the dead girl while simultaneously demanding an end to France’s civil strife.

OCLC shows just 1 US copy, at the Newberry; COPAC shows no copies in UK libraries. 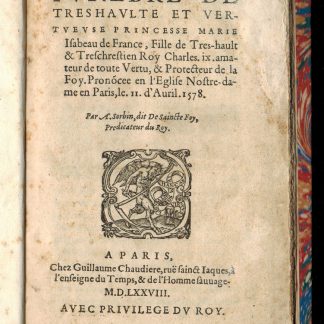