A Poetical Allegory of Newtonian Physics

Very rare first edition of this imaginative Utopian epic based on characters embodying Newtonian physical concepts. Symptomatic of the 18th century French love-affair with Newton’s rationalistic genius, Lemercier’s work was subsequently re-edited and issued under the title L’Atlantide in 1812; comparison of the two works shows substantial changes in the text and accompanying notes. The present work also contains an additional “Copernic et la Terre: Dialogue” (pp. 143-155) not found in the 1812 L’Atlantide.

In the preface to L’Atlantide, Lemercier describes how the warm reception to the present ‘fragments’ encouraged him to finish the rest of the work. In this earlier edition, each of the ‘chants’ is titled to denote its subject matter: Universal Gravitation; The Theory of Oceans; Light; The Phenomena of Optics; The Life Force; and The Magnet and Electricity - which were perhaps so obvious to the contemporary reader that the headlines are omitted in the 1812 version. The present version also includes copious notes to the reader which were much abridged in the revised version, but which are very helpful in explaining the scientific basis of Lemercier’s rather labored allegories.

“In France, discussions of Newton's genius were intimately bound up with ideological claims that reason was the motor of progress. As autocratic rulers and churchmen became less powerful, they were supplanted by a new intellectual monarchy led by secular heroes. Newton was elevated to the semi-divine status of a great historical figure, a timeless genius who served symbolic functions. One of Napleonic France's most prominent playwrites, Népomucène Lemercier, wrote a [series of] poetic epics devoted to humanity's four great men - Homer, Alexander, Moses and Newton. Newton, the rational man of science, now belonged to a collective pantheon of geniuses unlimited by epoch or field of achievement. Like a religious offering, Lemercier dedicated his scientific section to Newton: 'My fable is a homage to your genius'. Titled Newtonian Theogony, its rhyming couplets described a fictional Atlantis inhabited by a large cast of mythological characters whose romantic exploits allegorically explained modern [scientific] concepts” (Fara, Newton: The Making of Genius, p. 193).

Syngènie, for example, represents the chemical properties of matter; the tides are represented by the amorous (gravitational) conflicts of three gods - the Ocean, the Sun, and the Moon; and polar magnetism represented by the twin gods Axigères. Hélion the Sun is the allegorical and literal father of Lampèlie (light) and Pyrophyse (heat).

Louis Jean Népomucène Lemercier (1771-1840) was a child prodigy, publishing his first tragedy before the age of 16. In 1810 he was elected to the Académie, where he was eventually succeeded by his literary nemesis, Victor Hugo.

The "Essais poétiques sur la Théorie newtonienne" are peculiarly rare in census, perhaps indicating a small print run for private circulation only. OCLC shows no copies other than the BnF; COPAC adds a copy at the London Library; and the Catalog Collectif de France adds just one further copy at the Municipal Library of Chambery. 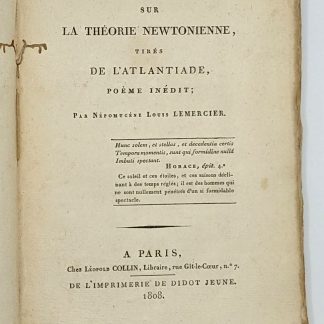