Bologna, Giuseppe Vitali for the author, 1869.

Rare sole edition of this early Italian treatise in favour of Darwin, published just five years after the first Italian translation of "On the Origin of Species" (1864, by Giovanni Canestrini in nearby Padua).

“The zoologist Achille Quadri (Sarteano, 1843 - Siena, 1895) has the merit of having been the first Sienese naturalist who supported and disseminated Darwinian theories on the evolution of species [...] Very little remains of his scientific work; in particular his 'Note alla Teoria Darwiniana', published in 1869, place him in the ranks of the first Italian Darwinists. The essay was supposed to have represented the first volume of an unfinished work intended to carefully analyze the new evolutionary theory of Charles Darwin, and contributing numerous examples in its favour. After completing the first volume, however, he abandoned his project causing the displeasure of the naturalist Giovanni Canestrini, considered one of the greatest Italian Darwinists. The 'Note' were appreciated by numerous scientific personalities, including Darwin himself, who thanked him in a letter and presented Quadri’s book to the Royal Society of London, and by the German philosopher and zoologist Ernst Hackel who encouraged him to continue his studies” (trans. from SIMUS [Museum of the University of Siena] magazine, Feb. 2019 issue).

We know that Quadri in fact sent Darwin two copies of the present work, as on 9 August 1869 Darwin wrote to Quadri to thank him - adding that he had had his wife translate a few passages and found himself greatly interested in Quadri’s findings on Dytiscidae (water beetles) and Culicidae (mosquitoes) as described on pp. 28-29 in the present work (and referring to Darwin’s own findings on pp. 73-74 of his "Origin"). Darwin’s own inscribed, annotated copy of the "Note alla teoria Darwiniana" is in the Darwin Library-CUL (cf. Marginalia 1:690); while the second copy still resides in the Library of the Royal Society (RCN 59917). 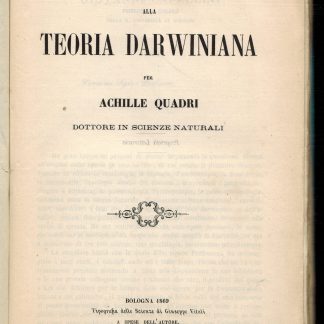