Rare first edition of this original German account of two icons of the American West: Daniel Boone (1734-1820) and the Shawnee chief Tecumseh (1768-1813). Although well-researched and running to an exhaustive 540 pages, the work was aimed at children (according to the title-page). Predating the more famous efforts of Karl May in the 1880s, German children’s literature celebrating the Wild West seems to have initially coincided with heavy emigration from that country to the Ohio Valley etc. during the mid to late 19th century.

Kottenkamp’s 12-page preface gives a brief history of the early pioneers of the American West including Boone, along with English-language sources and suggested reading material. The section on Boone covers his life from 1769, when he first began to explore Kentucky and encountered Shawnee resistance, until his death in 1820. Pages 373-540 in turn treat the life of “the Indian Chieftain and Prophet Tecumseh and his Brothers” during the period 1805-14, when Tecumseh’s chief adversary William Henry Harrison was serving as Governor of Indiana Territory.

OCLC shows US copies at Illinois, Detroit Public Library, Missouri, Duke, and the Huntington. A second edition appeared in 1858 and is more widely held. We note that a digitized copy of the second edition held at the Augsburg State Library is woefully incomplete, and wonder whether other copies have fared similarly. 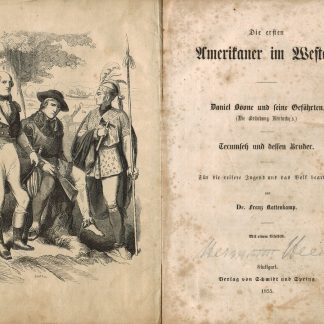