Newsletter on the Death of Vincent Lê Quang Liêm, The Patron Saint of North Vietnam

Extremely rare first edition of this Papal report on the activities and martyrdoms of two Dominican missionaries in Vietnam, including the first native-born Vietnamese clergyman to be executed there. Under the reign of Trinh Sâm (1739-82), the victims were ceremonially beheaded in Ðong Mo, Tonkin, on 7 November 1773. We have been unable to trace any earlier printed announcement of St. Vincent Lê Quang Liêm de la Paz (1732-73), making the present ephemeral document of considerable interest. Both men were eventually beatified in 1906, but only Lê Quang Liêm was canonized as a saint, in 1988.

The text is in parallel Latin/Spanish translation and is presented as a sort of ‘newsletter’ addressed to fellow Dominicans. Pages V-XV give an account of the exploits and brutal deaths of the Spanish-born missionary Jacinto Castañeda (1743-73) and the ‘Tunquinense’ Vicente Lê Quang Liêm - as reported in letters from the Vicar Apostolic in Vietnam. According to the text, Castañeda had been in Vietnam for just five years; one day after administering the Last Rites to a sick man, he was ambushed on his way back to his hut and taken into captivity. His captors attempted to demand a ransom in gold for the man’s freedom; after 3 years in prison he was joined by Lê Quang Liêm. Although the native-born missionary was offered release due to his nationality (p. X), he insisted on sharing the same fate as his Spanish-born colleague, and after torture both were finally executed.

The text also relates that a number of Vietnamese Christians turned out to watch the executions, and diligently recovered the bodies of the missionaries for burial in the ‘Church of the Village of Truh Linh’. This apparently enraged King Trinh Sâm even further, who then issued punitive edicts seizing money and imprisoning Christians in his country, as well as destroying churches and homes.

Few other details are known of the lives of these two missionaries. Lê Quang Liêm was born in Thôn Ðông, Trà Lu village, Phú Nhai district, Nam Ðinh province and was educated at the University of Santo Tomas in Manila before being ordained as a Dominican priest in 1758. returning to Vietnam.

OCLC shows just two copies worldwide, at the National Library of Spain and the University of Barcelona. 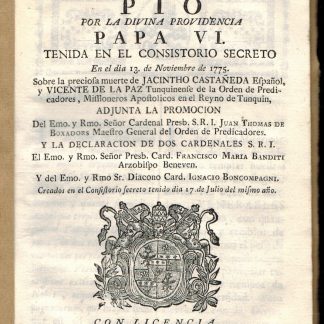