Scarce sole edition of this plea for peace between Denmark and Restoration England, penned by Vitus Bering (1617-75), uncle of the famous explorer of the same name. A widely-travelled Royal Councillor to the Danish King Frederick III, Bering evidently had intimate knowledge of the diplomatic missions between the two countries, on which he comments in detail on ff. I1-L4. Bering is more broadly critical of the ‘national character’ of the English, which he finds unduly belligerent, but along the way praises the eloquence of John Milton while denouncing the actions of two English ambassadors, Sir Gilbert Talbot FRS (ca. 1606-95) and Sir Thomas Clifford (1630-73).

Amidst the outbreak of the Second Anglo-Dutch War (1665-67), Talbot had been dispatched to Denmark in August of 1664, and hatched the scheme of having Frederick III secretly seize the Dutch fleet (Frederick’s nominal allies) with English assistance. This arrangement eventually came to naught, and Frederick duly declared war on England in February of 1666, following his Dutch and French allies.

Here, Bering launches a broad-sided attack on the English people, and their ambition to dominate the world (which he compares to Daedelus and Icarus flying too close to the Sun, on p. D3r!). Bering does not fail to remind the English that they were until just a few centuries ago a mere colony ‘or rather Province’ of Denmark, and notes that the English have bastardized and greatly exaggerated their own historical claims, in fact mainly based on original Danish sources (p. B1v). An odd observation of Bering’s is that England ‘has women, who unlike the men, have pleasant faces” (C4r). He gives a brief nod to Milton’s literary talents on E1r, and takes the opportunity to denounce Cromwell’s tyranny (G1v-G2v), but is certainly not approving of Charles II either. He examines the English claims to justifying the conflict in signatures E-Q, but ultimately finds the entire affair baffling: “Quis feret hoc rerum humanarum ludibrium?” [Who will win this mockery of human existence?] (E1r).

From 1639 to 1648 Bering travelled widely around the courts of Europe before returning to Denmark to serve as Historiographer Royal, and as court poet. "De Bello Dano-Anglico" was his only published work. OCLC shows US copies at UCLA, Newberry, Harvard, Michigan, BYU, and Yale.

The provenance of the present copy (an anti-English statesman involved in the Easter Rising of 1917) seems delightfully fitting to the overall anti-English tone of Bering’s work; but we note that the tract does seem to have made its way into at least a few English hands as well: the British Library, for example, holds a copy bound for Richard Harley, Earl of Oxford.

Lowndes, The Bibliographer's Manual of English Literature I, 48. On Talbot’s service as ‘Envoy Extraordinary at the Court of Denmark’, cf. Liste’s The Life and Administration of Edward, First Earl of Clarendon. 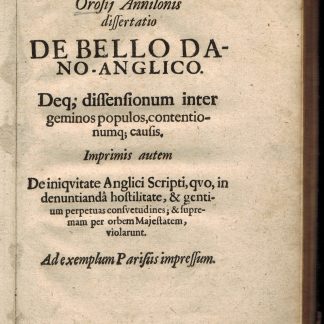