4to (197 x 146 mm). 8 pp., plus initial and terminal integral blanks. Bound in contemporary marbled wrappers; an exceptional copy, perfectly-preserved. With a handful of contemporary ink corrections to text.

Unrecorded sole edition of this remarkable slave narrative, recounting the capture, enslavement, and emancipation of the 38 year-old Ippolito Mazzolani. The taking of Europeans as slaves in the Mediterranean region declined through the late 18th century but persisted into the early 19th century; one of the main methods of freeing victims was through cash purchase by a religious order known as the Discalced Trinitarians, or ‘Redemptorists’, whose purpose was to raise funds for ransoms. In Ferrara, it appears that a local confraternity serving the same purpose was affiliated with that order, and published the present pamphlet to celebrate the successful return of this Ferraran to his native city after ten years of captivity at the hands of the Dey of Algiers. We have been unable to trace the present item in OCLC, ICCU, or KVK.

Ippolito was born in 1740 in Ferrara and left for Rome at the age of 14 for a career in the military. At 17 he was accepted into the ranks of the Holy Roman Emperor’s army and served in Spain and France for the next 12 years. At the age of 28, while en route off the coast of Catalonia, his ship was attacked by “una sortile Feluca di Corsari Algerini” [a small wooden boat of Algerian pirates] and the 28-year-old was taken captive. The text describes his treatment as a slave - e.g., “i vezzi dai Mori verso lui usati erano schiaffi pesanti, calci bestiali, e schiffosissimi sputi” [the habits employed by the Moors towards him were heavy slaps, bestial kicks, and the worst kind of spitting], but a curious amount of detail is also given on Ippolito’s poor diet during this time: “poca minestra di farro cotta in semplice acqua” [a little barley soup cooked in plain water], etc.

The text also points out that happily, rather than being sold into further slavery under “Hebrew lords, renegade Christians, or Turks” - as often befell other slaves - God in fact provided for the now middle-aged Ferraran. After being sold for 800 zecchini to an appreciative third-party buyer who recognized his true worth, he was then acquired by contract for 1300 scudi by the Procurator of the Trinitarians in Rome. His captivity thus came to an end on 14 September 1778 when he was dispatched from Algiers to Livorno. This was not the end of Ippolito’s adventures: immediately upon his return to his native soil, he developed a prolonged and dangerous illness, but was cured in Rome and finally made his way back to Ferrara, arriving on 6 April 1779. Hearing word of this prodigal son’s return, the archbishop of Ferrara and the Archiconfraternita della Redenzione organized a ‘giubilo’ or procession for him at the Porta di S. Paolo.

We have been unable to trace another copy of the present work in institutional libraries worldwide. However, we note a brief discussion of its contents in Giovanni Ricci’s "Ossessione Turca: in una Retrovia Cristiana dell'Europa Moderna" (2002), p. 170. 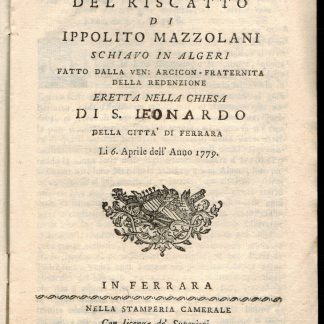