"Arabia Petrea" explored: an account of an 1865 expedition through the Sinai, Petra in Jordan, and surrounding regions, with 48 plates and albumen prints

Royal 4to (31 x 27 cm). 2 vols. 439; 46, (2 blank) pp. (vol. II, pp. 1-2 blank). With 2 title-pages printed in red and black, each with the author's wood-engraved decorated GAV monogram and motto; vol. 1 with 2 folding lithographed maps (1 printed in black, brown and blue, with the route coloured by hand in red, of the Sinai Peninsula; the other in black and white, of the city of Petra); 40 mounted albumen prints after paintings by Emile Pierre Metzmacher (mainly 11.5 x 16 cm), individually mounted with letterpress captions on the mount; and 2 engraved plates; vol. 2 with 6 numbered engraved plates of molluscs and insects. Set in roman and italic types, with incidental Arabic, and sans-serif Greek and Latin capitals to render ancient inscriptions. The Diario in the original publisher's maroon cloth with the author's crowned monogram gold-blocked on the front board and spine, and blind-blocked on the back board, with the title in gold on the spine. The Atlante in the original publisher's blue cloth, with the author's crowned monogram and the title gold-blocked on the front board, and the monogram in a larger size blind-blocked on back board. Both volumes with gilt edges, orange endpapers and with tissue guard leaves tipped in, protecting the albumen prints and engraved plates.

Rare first and only edition of an Italian account of an 1865 expedition through "Arabia Petrea", meaning the Sinai Peninsula and adjoining parts of what are now Israel and Jordan, including the ancient city of Petra, now in Jordan, where parts of "Raiders of the Lost Arc" were filmed (the spectacular ancient buildings are carved into the solid rock walls of the cliffs and probably date from the 5th century BC to the 2nd century AD).

The photographically reproduced paintings show the author on camelback, numerous Bedouins, Arabs, Egyptians and Ethiopians as well as archaeological sites, monuments and topographic views. The plates in the second volume depict molluscs and insects, reflecting the author’s own research interests in the field of natural history, in addition to archaeology. The typography has been designed to suit the antiquarian subject, with Louis Perrin's Augustaux roman capitals on the title-pages, the main text set in what would then have been considered an "antique" style (types influenced by pre-1800 models) and sans-serif capitals used to represent the ancient Greek and Latin inscriptions. The author quite literally put his stamp on the work, with his crowned monogram not only on the title-page and binding, but also embossed in the paper, where it serves as a sort of watermark.

The book does not indicate the size of the edition, but since most of the illustrations are original albumen prints, there cannot have been many copies produced. The present copy may be a more deluxe binding than the Blackmer copy, also inscribed by the author to a woman, for it was in green cloth with only Visconti's single initial "V" on the front board. The volume with the Diario is a presentation copy with the author’s presentation inscription to a woman named Josephine.

Bindings slightly worn, the blue cloth a little stained. First and last leaves of both volumes browned, some foxing, some fly-leaves with a tear (not affecting the plates), the map of Petra stained due to oxidation, with some browning caused by the albumen prints on the facing leaves, but overall in good condition. 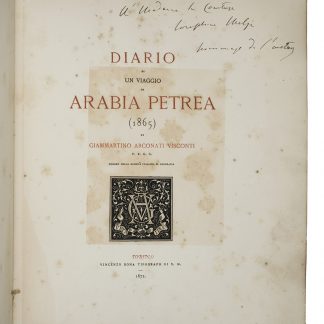