"A modern but rare love for the Muse and you"

Beautiful, rare illustrated letter to the New-York-based art dealer Julien Lévy, concerning a colour reproduction of one of Matta’s paintings for the "Horizon" magazine of the British collector and patron Peter Watson. In his typical poetic and associative style, Matta moves from rather obscure remarks to the matter at hand: "At the tenebrum of the theatrical death of the city, purring of this red lake of lobster [?], or as a construction of the spirit one could have lost, in a photographic atmosphere, the white girl (limit of the representation of this colour). Black waters of the Gulf, I hide you! damned. I learned from [Nicolas] Calas that Watson in London would like to reproduce one of my canvases in his magazine, if possible in colour. I do not have a single photograph of my paintings, expensive embroidery, I do not know the price of a colour photograph, but if it is possible, well (if impossible, an automatic black and white and somewhat exalted)". Matta asks Levy to hire a photographer named Lee, probably his friend Lee Miller: "It would be necessary to send, if possible, the colour negative of the canvas with the central tree of multiple problems of vision (re-folding in its astral being). Canvas 15 Figure, which is in the gallery and which answers to the name of 'Memorable transformations of Death'". The negative was to be sent to London by plane, as the matter was pressing.

Julien Lévy was Roberto Matta's art dealer in New York and did his first solo show in 1940. The painting supposed to be photographed cannot be identified with certainty but it is quite likely "Fabulous Race Track of Death (Instrument very dangerous to the eye)", dated ca. 1941 and held in the Yale University Art Gallery. The similarities of the title and the representation of a tree suggest this identification. Horizon no. 117 (September 1949) featured a text on Roberto Matta by Pierre Mabille and reproductions of several of his paintings.

At the top of the first page, Matta calligraphed "Julien" in large letters with black and red oil pastels. The original drawing of an amorphous shape incorporates an illegible text and is captioned: "Fatal circles of the fly“. Matta signed with green and red oil pastels. 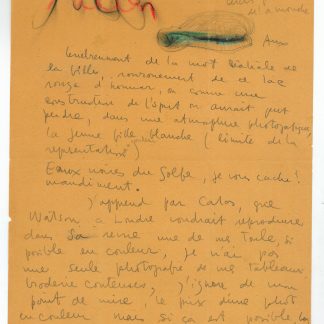