"I am in the clutches of my oppressors": The apology of a Roman consul

Folio and 4to. 14½ pp. on bifolia. With autograph envelope. Together with the 62nd issue and the supplement to the 60th issue of the "Monitore di Roma" as original attachments to the letter.

Historically significant letter to Joseph-Antoine Florens (1762-1842), commissioner of the Executive Directory of the French Republic in Rome, with Visconti’s fervent defence following his dismissal from the government of the short-lived Roman Republic. Visconti had been selected as one of five consuls in March 1798 by the three French commissioners. In September 1798 a successful defamation campaign in the periodical "Monitore di Roma", steered by a fellow consul and members of the civil oversight commission, led to the enactment of a law removing Visconti and Pietro Panazzi from the consulate and barring them from leaving the city. In light of this "cabal" and "calumny", Visconti wrote this detailed apology and rebuttal of all accusations of enrichment through illegal real estate deals that were brought against him. According to Visconti, a legal attempt of the consulate to impede the circulation of the calumnious issues of the "Monitore" was hindered by the civil commission, which "did not seem strange anymore" once he learned that the author of the articles was brought to Rome with the help of police minister Francesco Piranesi and invited to dinner by the commission. The two September 1798 issues of the "Monitore di Roma" in question were attached to the letter. Visconti identifies the consul Librorio Angelucci (1746-1811), the civil commissioner Jean Bassal (1752-1802), and the former interior minister Corona as his main opponents and accuses them of corruption: "Bassal, who wanted to rid himself of an obstacle to his malversations, his venalities, his corruptions of all kinds, and who was extremely shocked by my opposition to his greedy projects concerning the debentures". With respect to the accusation of illegal purchases, Visconti writes: "I thought that a magistrate was not obliged to keep his remunerations locked in a safe, that the acquisition of national goods deriving from abolished ecclesiastical establishments and executed in a legal way should not be considered a crime. It actually becomes a patriotic act in a time, when superstitious prejudice causes all kinds of obstacles to the distribution of such goods". The deals are listed in a separate part of the letter with the comment: "He was so far from hiding these acquisitions that he immediately had the true acquirer declared by public deed". Visconti underscores that he would have preferred "literary work" over his political appointment, reminding Florens of his wish to be placed in the nationalized Vatican library. Copies of the letter were sent to Florens’s fellow commissioners Gaspard Monge and Pierre-Claude Daunou, the architects of the Roman Republic: "In my current state I cannot hope for any other help than yours and that of your old colleagues; I rely on your benevolence. I also write to the citizens Daunou and Monge and I entrust you entirely with the care for my reputation, my tranquility, my fate. Use this letter as you consider the most adequate, it contains nothing but the truth".

Following the occupation of Rome by Neapolitan troops on 30 September 1799 and the subsequent restoration of the Papal States, former officials of the Roman Republic were heavily persecuted and forced into exile. Visconti received a warm welcome in Paris, where he was named first curator of antiquities of the Musée Napoléon at the end of 1799 and became professor of archaeology at the Institut de France in 1803. His opponents from the tumultuous times of the Roman Republic are judged harshly by history: both Bassal and Angelucci were repeatedly accused of corruption and died in relative obscurity. Visconti's letter is important testimony to this short and little-researched episode of Italian history.

Traces of folds and minor browning to the folds and borders; envelope with traces of seal. Well preserved. 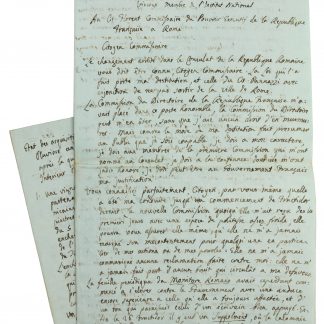