4to. 31, (1) pp. With printer's woodcut anchor-and-dolphin device to title-page and 26 woodcut illustrations (one full-page). Prefixed by 3 manuscript pp. of index and followed by 19 pp. of manuscript additions (paginated 32-52) as well as 7 pp. of manuscript folding tables. 19th century green wrappers with handwritten spine-title. An engraving loosely inserted.

First edition. Rare treatise on the history of the orders of knighthood, by the Reverend Andrea Guarini, discussing the origin and foundation of all religious and military orders established since the early Middle Ages. The work includes descriptions of the Constantinian Order ("the noblest and oldest", p. 5), the Knights Templar, the Knights of Malta, the Military Order of Christ, and the Order of the Golden Fleece, with the woodcut illustrations showing the various orders' insignia. Dedicated to Giovanni Andrea Angelo Flavio Comneno, Prince of Macedonia, Count of Drivasto, and Grand Master of the Constantinian Knights of St. George.

The treatise is preceded by a handwritten index and followed by a handwritten supplement from the first half of the 18th century describing several additional orders, including the Order of the Starry Cross, the Livonian Order, and the Cavalieri del Giglio. This section is followed by a 19th century seven-page folding list of the main orders of the world, arranged alphabetically by country (from Asia to Württemberg). It is titled "Elenco de' principali Ordini Cavallereschi" and is arranged as a table, giving the respective country and name of the order, the year of its foundation, the name of the founder, as well as brief comments (until 1834).

Binding rubbed, spine and lower cover a little chipped. Occasional brownstains to paper; an old shelfmark to pastedown. With a 19th century note in Italian on the flyleaf, stressing the exceptional combination of texts from several centuries in the present volume: "Esemplare distinte per aggiunti mss. di più epoche". 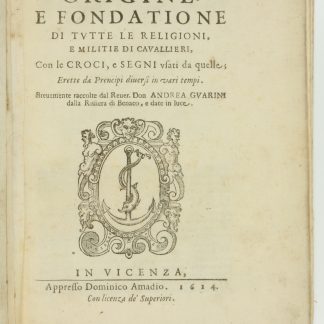