Only edition: one of the great mysteries of Qur'anic literature, and apparently the first translation of the Qur'an into French by a woman - or, as it is glossed in the British Museum catalogue, "a compilation of passages of the Koran, of Traditions, and of ideas peculiar to Fatma Zaida" (Ellis). Following those of Du Ryer (1647), Savary (1783), and Kazimirski-Biberstein (1840), this fourth French version of the holy text is original in many respects: notably, it is the first to retain the untranslatable name "Allah" instead of substituting "Dieu". Also, it does not follow the traditional order of surahs, but tries to arrange them chronologically, by Meccan and Medinan surahs (as, curiously, did Rodwell in his English translation, which appeared in London that same year). Indeed, as Ellis noted, this is not at all a literal translation: instead, it is interpretative, interventionist and even feminist, liberally transposing verses from surah to surah and often offering less of a translation than a new creation, more true perhaps to the spirit of Islam than to the sacred text. As early as 1961, the scholar Abul Muzaffar drew attention to the fact that Fatma-Zaida's name is probably spurious (though conceivably borrowed from a servant at the Turkish Embassy at Lisbon) and that the author was very probably a European convert to Islam, not proficient in Ottoman Turkish and not fully in French, either, who felt spiritually at home in the Muslim Orient and, wishing to defend Islam from its detractors, produced an apologetic version of the Qur'an. If this is so, the translator was still almost certainly a woman: as Rim Hassen has variously pointed out, Fatma-Zaida's text quite clearly endeavors to "project a positive image of Muslim women and their position in society" (p. 226), and even goes so far as to interpolate entirely new material such as verse "209" in the Third Sura, which impresses on the reader to "require the castration of merchants of female slaves"! - Some browning and foxing throughout; untrimmed as issued. Lower original orange wrapper cover preserved but partly pasted to the temporary wrappers, upper cover inscribed "O Alkorao (o Livro Sagrado dos Mahometanos)". An exceptional work, very rare in libraries and never reprinted. 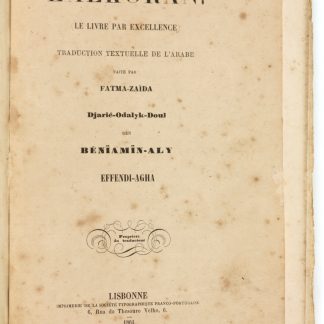