[Probably Austria, second half of the 17th century?].

A Biblical cento in praise of Emperor Leopold I, ostensibly composed by "Hieronimo Santinelli, the most learned prefect of the Viennese Imperial and Royal Court Library". In fact, the head librarians during Leopold's rule were Matthäus Mauchter (1650-63), Peter Lambeck (1663-80), Daniel Nessel (1680-1700), Hermann von Grevenbruck (1700-05), and Johann Benedikt Gentilotti (1705-23), none of whom are likely to have used what appears to be a pseudonym. Possibly the name alludes to the Italian poet, alchemist and adventurer Francesco Maria Santinelli (1627-97), a marquis who also served as a councillor in the chamber of Leopold I.

A later note on the badly rubbed title-page states that this manuscript, an autograph of the author, was presented by Emperor Joseph II to Othmar Conrad, provost and archivist of Rajhrad monastery near Brno during the 1760s.

Exterior quite stained and dusty; occasional waterstains. A pen-and-ink frontispiece showing the double-headed Imperial eagle is all but erased and further obscured by numerous broad pen tests. A curious survival. 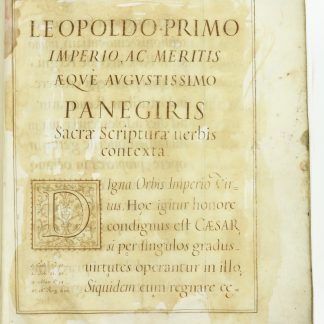