The first Westerner to visit the Holy Cities

Burckhardt, Johann Ludwig (John Lewis). Travels in Arabia, comprehending an account of those territories in Hedjaz which the Mohammedans regard as sacred.

First edition (the second of the same year was in two volumes, octavo). Burckhardt travelled disguised as an Arab, making his notes clandestinely. This work deals primarily with his travels to Mecca and Djidda, Medina and Yembo. The Lausanne-born Burckhardt (1784-1817) was a remarkable character, the first Westerner to visit the Holy Cities. In the guise of a pilgrim "he proceeded to perform the rites of pilgrimage at Mekka, go round the Kaaba, sacrifice, &c., and in every respect acquitted himself as a good Muslim. No Christian or European had ever accomplished this feat before; and the penalty of discovery would probably have been death. [...] Burckhardt possessed the highest qualifications of a traveller. Daring and yet prudent, a close and accurate observer, with an intimate knowledge of the people among whom he travelled, their manners and their language, he was able to accomplish feats of exploration which to others would have been impossible" (Stanley Lane-Poole, in DNB VII, 293f.).

Extremeties quite severely rubbed and bumped. Spine shows traces of early repairs, using the original material. Several tears to the half-title, light foxing to beginning and end, otherwise internally a very good copy from the library of the Rev. Thomas Thurlow (1788-1874), Rector of Boxford, Suffolk, with his engraved bookplate to the front pastedown. 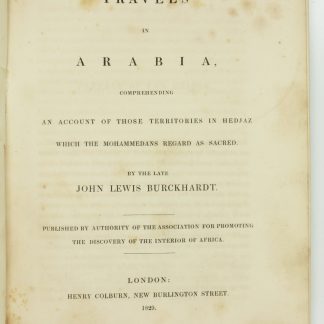 You're viewing: Burckhardt, Johann Ludwig (John Lewis). Travels in Arabia, comprehending an account of those territories in Hedjaz …London, 1829. € 18,000.00
Add to cart