Exceptionally rare: the Thousand and One Nights, the first complete edition in Arabic and the first edition printed in the Arab world - this copy owned by the French oriental scholar Barbier de Meynard

First complete edition in Arabic of the Thousand and One Nights, and the first edition printed in the Arab world. Very rare, with seven copies only located in libraries worldwide (American University Beirut, British Library, Danish Royal Library, Harvard, Huntington, and Yale); none traced in auction records. The Bulaq edition was preceded by another two-volume edition printed at Calcutta between 1814 and 1818, which contained a selection of 200 "Nights" only; the German orientalist Max Habicht began his multi-volume, so-called Breslau edition in 1824, though it remained incomplete on his death in 1839, and at any rate used the Bulaq text as one of its many sources. The Bulaq edition was prepared by one ‘Abd al-Rahman al-Sifti al-Sharqawi, probably from a single manuscript which is now lost. It proved "more correct than the garbled and semi-colloquial renderings given by the manuscripts used in the compilations of Calcutta I and Breslau", and was instrumental in stabilising the Thousand and One Nights corpus (Irwin, The Arabian Nights: A Companion, p. 44). It was the main source for Edward Lane’s pioneering English translation (1889-41) and for the last of the four historically important Arabic editions, published at Calcutta in 1839-42 (and known as "Calcutta II"). Bulaq and Calcutta II "superseded almost completely all other texts and formed the general notion of the Arabian Nights. For more than half a century it was neither questioned nor contested that the text of the Bulaq and Calcutta II editions was the true and authentic text" (Marzolph, The Arabian Nights Reader, p. 88).

The printing press at Bulaq, Cairo, founded in 1821 by Muhammad ‘Ali Pasha, was the first indigenous press in Egypt and one of the first anywhere in the Arab world, its literary output catering to a keen export market and increased demand among the expanding professional classes of Muhammad ‘Ali’s Egypt. For the first few years the press used types cast in Italy, then France. "In 1826 Muhammad ‘Ali sent a delegation to Europe to study printing, and by the 1830s printing had reached a good technical level at Bulaq" (Kent et al., eds., Encyclopaedia of Library and Information Science, vol. 24, p. 63). The present edition exhibits the high standards of Bulaq printing, with the main text composed in authentic and legible naskh-style types, interspersed with attractive headings in nasta’liq.

Condition report: 19th-century bibliographical notes on a typed vignette mounted on the endpapers of each volume; bibliographical notes in pencil on endpaper of vol. 1. Handwritten tables of contents loosely inserted to both volumes, probably in Barbier de Meynard's hand in ink and pencil. A few marginal notes in Arabic and French written in pen and pencil throughout. Occasional spotting; pages very slightly yellowed due to age. A tiny hole throughout, at the upper inner corner of the framing rules. Vol. 1: Two small holes at the gutter of fol. [157]2 (pp. 627f.) and minute damage to the upper edge of the last 9 ff. Spine rubbed, upper compartment professionally restored. Vol. 2: A larger light stain to the margin of fol. [4]1 (pp. 13f.), moderately touching the text area but not affecting legibility. Insignificant worming to lower margin of the first 10 ff. Spine rubbed, front hinge professionally restored. Interior of both volumes is clean and firm, overall in very good condition.

Provenance: from the collection of the French oriental scholar Charles Barbier de Meynard (1826-1906) with his stamp and ownership inscription "Bibliothéque de Mr Barbier de Meynard" in both volumes. A member of the Société Asiatique and editor of "Dictionnaire Géographique de la Perse", Barbier de Meynard authored several books and articles and co-translated the 9-volume "Moruj al-dahab" ("Les prairies d'or") of Al-Masudi (Paris, 1861-77). His inscription "Donne par A. Dantan" in the first volume probably refers to Antoine Dantan, a member of the renowned French dragoman dynasty. 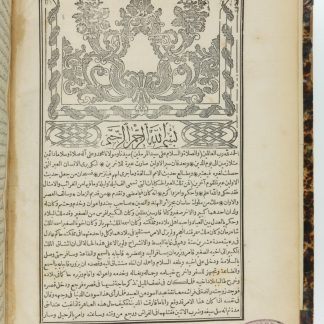