[Mesopotamia]. Photograph album of Iraq, the Arabian Gulf, and the Red Sea.

Private photo album composed by a British soldier or engineer active during the Mesopotamian Campaign of the First World War. It contains not only pictures of landmarks like the Baghdad railway station, the British Residency, the Abu Hanifa Mosque in Baghdad, and the Whiteley Bridge in Basra, as well as street and river scenes, but also shows the military aircraft of the Entente (frequently after a crash), as well as portraits of pilots and the collector's comrades, including two lieutenants resting on a blanket in a meadow. Other motifs include more sinister themes such as the gallows on the Baghdad market square, but also a group of smiling soldiers bathing in the Gulf of Aden, the shorelines of Kut al Amarah and Kurnah, the Arabian Gulf, and the Red Sea.

With round green pagination labels. Album produced by W. Johnson & Sons in London. Binding slightly rubbed. Occasional traces of glue; a few marginal tears; the paper pasted on the cardboard loosened in places. 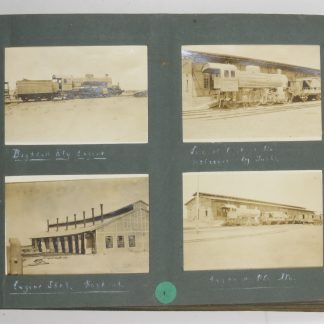