The discovery of a new planet

Rare first edition of this treatise on the planet Uranus, discovered by William Herschel in 1781 after important groundwork having been done by Bode. Uranus was the first planet not known since antiquity, and its discovery doubled the expanse of the known universe. "Bode gave the name Uranus to Herschel's newly discovered planet" (DSB). "Among the astronomical writers of the 18th century, Bode occupies the first rank" (cf. ADB). "Besides his tables, his two sky atlases were for a long time indispensable tools for astronomers [...] Bode was almost the only writer to support the then not widely known ideas of Kant, Lambert, and Herschel on the infinity of space, the infinite number of inhabited worlds, and the continuous birth and passing away of stars according to natural laws" (DSB II, 220f.).

Occasional brownstaining. The folding plate is pased to the outer margin of the final text leaf. A well-preserved copy, untrimmed as issued. 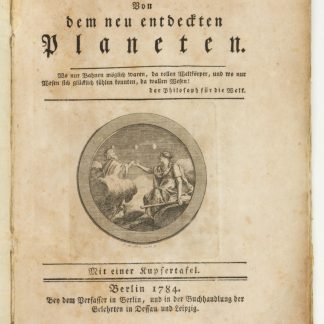