This grand, large Qur'an bears typical characteristics of early 14th century Qur'ans copied and illuminated in Cairo and Damascus. The illuminated marginal decorations, in both round and lozenge shapes, as well as the knotted gold rosettes that mark the end of each verse, are frequently found in Qur'ans from Cairo dating to the 14th century, as well as in Ilkhanid Qur'an production of the same period; however, it is also possible that the manuscript was produced in Damascus, where the gold-on-gold decoration seen in the surah heading and verse count are also known features of Qur'ans produced there.

The lavishly illuminated end piece indicates that the manuscript dates to some time before 1330; the knotted interlaced border framing the text and the surah titles and verse counts on an intricately designed floral background being some of the main features exhibited in Qur'ans of this period and area. The final page contains the penultimate surah on a delicately designed, barely visible background of scalloped motifs set in a gold frame, also a feature commonly seen in this type of Qur'an.

The elegant Naskh hand, as well as the finely executed gold muhaqqaq headings and copious marginal illuminations throughout the whole of the manuscript, suggest that the manuscript was the work of a notable illuminator and scribe, perhaps in the employ of the royal Mamluk court. The large size indicates that it was made for a person of high rank, and the waqf inscriptions which appear on various pages of this Qur'an may indicate that it was produced as an endowment by a wealthy individual. 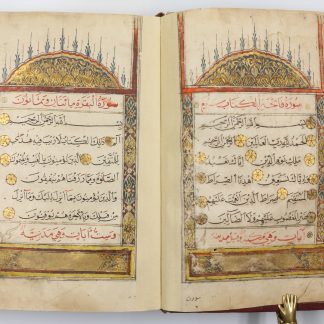