Unpublished chronicle of the Gritti family

Hitherto unknown, unpublished chronicle of the Gritti, a Venetian Doge family, containing a genealogy, account book, and lists of building projects from ca. 1566 to 1680.

The most famous representative of the family, which can be traced back as far as the 13th century, was probably Andrea Gritti (1455-1538), the 77th Doge of Venice. Their rise to fame and immense fortune is mostly due to the achievements of the ancestor of the very branch of the family commemorated here, namely Ludovico Alvise Gritti (1480-1534), who was closely involved in the fate of the city republic as a merchant, banker, and politician. Alvise Gritti had important trade connections throughout Ottoman Hungary and the Orient; as a minister under Sultan Suleyman I (1494-96) he worked in Istanbul, reporting directly to the Grand Vizier of the Ottoman Empire, Makbul Ibrahim Pascha (1493-1536). From 1530 to 1534 he served as Imperial Regent of Hungary.

Binding a little duststained, rubbed and bumped; vellum covers splitting along the edges. A large flaw to the upper cover as a result of the fastener for the flap's tie having been torn out. A unique survival. 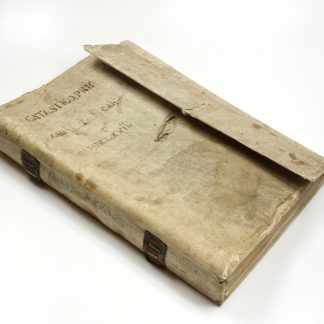