Confirming a bill of sale ("final concord") from 12 November 1578, according to which John Dawnay has sold in "Cowycke" (Cowick, Yorkshire) to Radinus Cade at a a price of 40 pounds sterling. The verso has a note regarding Dawnay's later repurchase of the land: "Afterwardes bought of him aigaine by [...] John Dawney called Watson Thinge".

Cowick was a royal desmesne; under King Edward II it had for some time served as seat of the government. It was early acquired as a royal fiefdom by the Dawnay family (later Viscounts Downe), who also owned land in the neighborhood.

Headed by the Queen's title: "Elizabeth dei gratia Anglie Francie & hibernie Regina fidei defensor &c". The seal shows the Queen on her throne with orb and sceptre with the royal arms on the reverse. 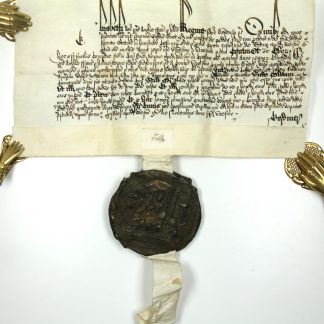