The famous nautical chart by the French geographer and cartographer d'Anville (1697-1782), encompassing the Arabian Gulf from Basra to the Straits of Hormuz. Although the southwestern part of the Gulf is poorly explored, various Gulf cities are identified, including "Julfar" (Ras al-Khaimah), "Mekehoan" (Umm Al Quwain), "Kalba", and "Ras-ol Lima". The city of "Al Katif" is clearly identified. The Qatar Peninsula is entirely absent, but the island of Bahrain is noted (though misaligned), and the coastline between Bahrain and Abu Dhabi is marked as an "entirely unknown coast".

With several contemporary manuscript additions in ink, including "Gatar" (south of Bahrain) and "Kouait" (Kuwait), as well as a few later notes in pencil in the Bahrain area. Old shelfmarks on the reverse. Slightly toned. 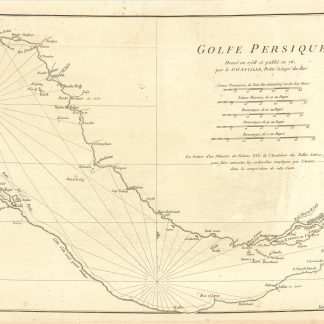