Substantial set of first edition U.S. pilot charts from the Second World War. Includes 2 maps of the Arabian Peninsula (668 and 669), depicting the border region of Saudi Arabia, Yemen and the Aden Protectorate and covering the area between the 42nd and 54th meridian east, and between the 16th and 20th parallel north. Also shows the Frasan Islands as well as large parts of the Rub' al Kahli desert with sections marked "unexplored", the city of Salala constituting the easternmost point.

The remaining maps cover western Afghanistan (439), labelling Herat and Farah, central India (559), with cities such as Jabalpur, Bhopal and Achalpur, and the Indian Ocean showing the Chagos archipelago (1037) and Comoro Island (1052).

Chart no. 1037 dampstained with loss to the centre, chart no. 669 lacks approx. 5.5 cm, clipped away at upper margin. Remaining maps with occasional small tears, but overall in good condition. 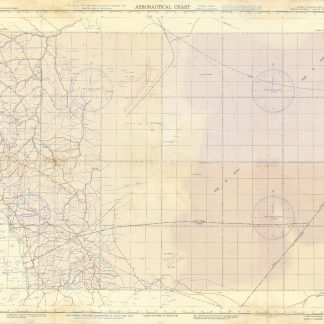