Rare original photos of five aircraft on the runway. Includes one of the few surviving images of the G-ALYU de Havilland Comet - the plane that in May 1952 completed the world's first passenger jet service from London to Johannesburg. Less than two years later G-ALYU was scrapped and its fuselage used for metal fatigue research following the crash of another BOAC Comet in January 1954. All Comet 1 aircraft were grounded in April 1954.

Among the other depicted aircraft is a Handley Page Hermes IV, registered G-ALDM. The Hermes IV model entered service with BOAC in 1950, taking over from the Avro York on the West Africa service from London to Accra via Tripoli, Kano and Lagos, with services to Kenya and South Africa commencing before the end of the year. 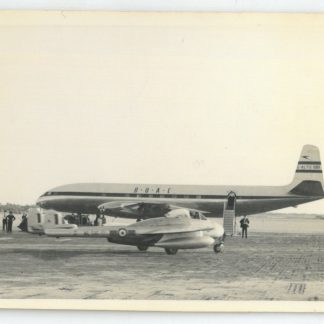