With 46 coats of arms and an entry by Caspar Schoppe

Johann Nicolaus Sigmar von Schlüsselberg was the son of Hans Georg Sigmar, whose family hailed from Württemberg but who married, in 1575, the Upper Austrian noblewoman Judith Hohenecker zu Hagenberg and settled in Linz. Many stations of Johann Nicolaus's life are evident from his album: the earliest entries are from Tübingen, where he matriculated in 1600. He remained there until April 1602, then appears temporarily to have joined the military (an entry from 1602 is dated at the infantry camp at Kalkar) before continuing his studies in Padova and Siena in 1604, visiting Naples, Florence, Venice, and Rome. It is here that he acquired the half-page entry by the versatile Baroque publicist Caspar Schoppe (1576-1649), of whose life Faber du Faur provided an apt capsule: "He began as a philosopher and ended as one, but in between there lay a long, colourful, and often disorderly life which brought him to a high station [...] and into contact with the most outstanding of his contemporaries. He visited Madrid, acted as agent of the Turkish sultan, took part in the Congress of Electors at Ratisbon, and had a finger in every possible political affair. In a later period he would have become an eminent newspaperman" (I, 240).

From October to December 1605 Sigmar visited Cracow; in 1607 he was back on his estates in Linz. In 1608 he untertook a tour of southern Germany, visiting Heidelberg and Hanau, and had a splendid frontispiece painted for his album in 1609. Entries from 1612 give evidence of a journey to Copenhagen, where he stayed at the court of King Königs Christian IV; he also spent time in Gottdorf at the court of the Dukes of Holstein, garnering the entries of no fewer than seven dukes. In 1613 he visited the Baltic coast (Szczecin, Koszalin, Wolgast, and Gdansk); 1614 sees him at the Hanoverian-owned castle Neuhauss on the Elbe, where the court Kapellmeister Zangius signs his album. He continued to move in military circles, as evidenced by several entries in uneducated hands. The final entry dates from Heidelberg, on 9 May 1616: possibly, the tense political situation on the eve of the Thirty Years' War required his presence on his estates in Austria.

Sigmar went on to serve as captain, deputy and envoy of the Upper Austrian Estates. He probably died around 1627, since his heirs lost their possessions in 1628 due to the expulsion of the Austrian Protestants by the Emperor.

Occasional light fingerstaining and insignificant edge flaws. All written pages appear to have been removed around 1800 from the album's first binding, assumedly then in a state of disrepair, and rebound in pretty red satin (the covers now appearing quite scuffed and threadbare), with additional blank leaves intercalated to protect the painted coats of arms. Professionally rebound and leaves pasted to tabs; edges a little irregular. A fine document of the life and friendship network of a German-Austrian noble protestant scholar, traveller, and occasional military man during the decade preceding the Thirty Years' War. A list of contributors is available. 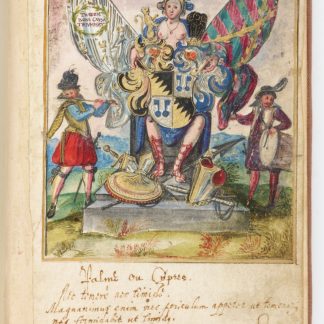