Second German edition (the original French edition appeared in 1851); an English translation was published in 1863. The book is divided into two parts and includes extensive information on the principles of Arabian cavalry, military costumes of horsemen, celebrated Arabian horse breeds (Haymour, Bou-ghareb, Meizique), how to choose and acquire your horse, nutrition, hygiene, the meaning of the variously coloured horse attires, rigging, veterinarian medicine and illnesses, crippledness, castration, various kinds of military attacks in the deserts and how to execute them, tribal wars, as well as ostrich, gazelle, and falcon hunting. The book concludes with general remarks on the Sahara desert and a letter from the Algerian Sufi saint and military and religious leader Abd-el-Kader (1808-83), the Emir of Mascara who founded the Algerian state and led the Algerians in their struggle against French domination and in 1847 was imprisoned with his family by the French government in the fortress of Lamalgue in Toulon (France). The Emir wrote the letter while Daumas served as French consul in Mascara. In this letter the Emir, calling himself Daumas' friend, answers some questions Daumas previously asked him while preparing this book.

Some annotations in coloured pencil. Old handwritten ownership "Berkovich" to title and preface. Title-page and table of contents professionally repaired. 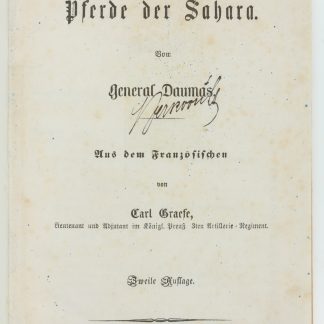