Inscribed and signed to the parents of Lucian Freud

First edition of Freud's famous study known in English as "Civilization and Its Discontents", inscribed and signed by the author to his son Ernst, an architect, and Ernst's wife, the classical scholar Lucie (Lux), née Brasch (the parents of Lucian Freud): "Seinen lieben Kindern Ernst u Lux / vom Verf.".

Provenance: from the collection of the Austro-British photographer and cinematographer Wolfgang Suschitzky, whose family had known the Freuds in Vienna and who later, after his emigration to London, lived near the Freud Museum in Maresfield Gardens. Passed by descent to his son, the cinematographer Peter Suschitzky, whose works include the David Cronenberg film "A Dangerous Method" about the affair between C. G. Jung and Sabina Spielrein. Latterly in a Belgian private collection. 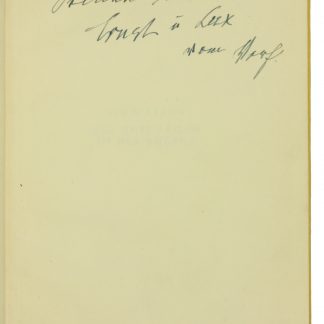