First American edition of the Qur'an, produced by Isaiah Thomas, founder of the American Antiquarian Society and the largest and most important Massachusetts publishing house during the late 18th and early 19th centuries. Thomas adapted a translation of the French orientalist André Du Ryer for the American market, with occasional notes, including Turkish traditions. Du Ryer had been the envoy of the French king at Alexandria and Constantinople in the 17th century. His translation was the best available, and was frequently reprinted and translated into other European languages throughout the 18th century.

Some browning and light foxing throughout. Small hole slightly affecting text to leaf Aa6; quires Ff and Gg transposed; a tear in leaf O4 professionally repaired. Provenance: From the collection of the Massachusetts businessman Henry E. Call (fl. 1860s) with his ink ownership to title-page and oval stamps to flyleaf; front pastedown has mid-19th century note of acquisition for $2.00 from E. P. Dutton's Boston bookshop, founded in 1852. 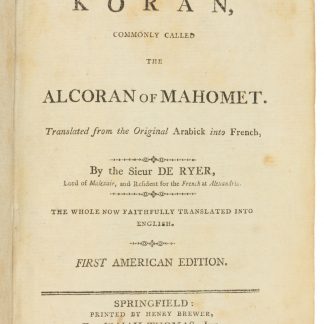