The second letter to an unnamed female recipient, probably Lefébure-Wély's mother or another close relative, is humorously introduced as the "orthography of a student of the École des frères after 4 years, 4 months, 4 days, 4 hours, and 17 minutes of assiduous work" and continues in an imaginary phonetic French with an invitation to lunch: "Madam, je çuis onteu devoufer dégeuner aucito çamedit, met sais de votref aute, vous me gâté ci facileman qu’œuf se la me cèmble trait bon hé qu’œuf jàbus e. brefe [...]". A small ink drawing of a barrel organ near the bottom of the second page completes this charming document from Lefébure-Wély's youth.

Louis James Alfred Lefébure-Wély assisted his father as the organist of Saint-Roch in Paris from the age of 8. When he was 14 his father died, and he succeeded him as official organist of Saint-Roch. In 1832 he entered the Paris Conservatoire, studying organ and composition. As a performer, Lefébure-Wély played a major role in the development of the French symphonic organ style and was rated above eminent contemporaries including César Franck.

Dated letter somewhat brittle, with foxing and several tears. Both letters with traces of former mounting. 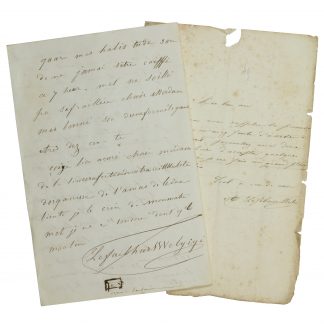