Charming letter to a piano student, apologizing for not having responded earlier and giving a detailed account of current events. Massart admits that she has "neither melted away, alas, nor submerged", although it would have have been "an excellent excuse for my negligence". In fact, she "suffered from neuralgia", was "highly occupied with persistent students", and helped her husband, the violinist Lambert Joseph Massart, with the organization of a competition at the conservatory, which had been "a complete success" at "the price of our sweat". Massart continues to announce a trip to neighbouring Trouville-sur-Mer to meet President Adolphe Thiers: "I am exhilarated to be seeing the President of the Republic in a swimsuit and to float next to him". In closing, she complains of her students' laziness and apologizes for being unable to send a portrait photograph which the recipient had requested: "You will have to content yourself with a profile. It is a shame because I look friendly and I would have wanted to send you a serious and severe attitude".

Whether Massart's announcement of a meeting with Adolphe Thiers was a joke cannot be determined. Nevertheless, the remark dates the letter to 1872, when Thiers spent his summer holiday in Trouville at the Chalet Cordier during his presidency (1871-73).

Louise Aglaé Massart studied at the Paris conservatory from 1838 and won a prize in 1840. Following her first public appearances, she was named court pianist to Helene of Mecklenburg-Schwerin, Duchess of Orléans. In 1849 Massart married Joseph Lambert Massart, a renowned violinist and professor at the conservatory. Both Louise and her husband, co-founders of the Société Philharmonique, were close friends with Hector Berlioz. As a pianist, Louise Aglaé Massart was an active interpreter of chamber music. From 1856 to 1867 she played in the "Société Armingaud et Jacquard", concentrating on the chamber music of Mozart, Beethoven, Mendelssohn, and Schumann. In 1874 Massart took over the piano class of Louis Farrenc at the Paris conservatory. Clotilde Kleeberg was her most important student.

On stationery with embossed monogram. Traces of former mounting and minor browning to the upper border. 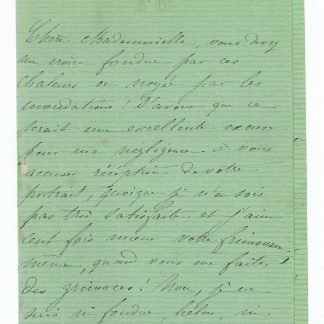