Interesting letter to a Monsieur de Villeneuve concerning the literary critic Julien Louis Geoffroy. After apologizing for not having been home when the recipient called, Brancas explains that he wrote two letters to a Mme. "Trois Étoiles" when he was looking for "l'Abbé Geoffroy", an alter ego of Julien Louis Geoffroy, in relation to "his feuilleton". Mme. "Trois Étoiles" appears to be another pseudonym in connection with the critic. Geoffroy, who was notorious for his scathing pen, is regarded as the father of the feuilleton in France, editing several literary reviews over the course of his life. Brancas doubts the relevance of the letters but offers to send them to Villeneuve for his "Bibliothèque Française", an unidentified publication.

Louis-Léon de Brancas, 3rd duc de Lauraguais, was famous for his bonmots and his luxurious lifestyle during the Ancien Régime. He promoted the use of historic costumes in the theatre and spent large sums on scientific experiments, leading to his reception into the Académie des sciences in 1771.

Well preserved. With tear from breaking the seal. 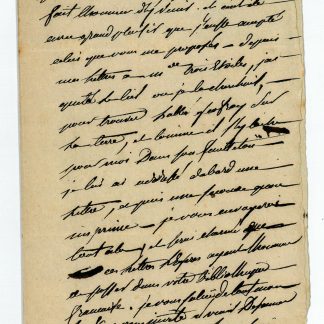